Listen to Scott read his story!

I am referring to the violence used by men against women, which makes me feel deeply uncomfortable as a man.  This has been going on for centuries and is an accepted part of the fabric of our unconscious society.  Accepted in that it is not a surprise when it happens and therefore is not really news.  As a Soultype 6, I feel the energy of uneasiness or fear when I pass a woman out on their own during the day or night.  I often walk far to the opposite side of the path to try and show that I am not one of those men, yet this does nothing to alleviate the fear.

All men have become the problem, by the actions of a significant number of men.  It is not that all men are conducting violence against women, it is simply that for women any man is a potential threat.  Over the past decade 1425 women have been murdered in the UK by men.  That is roughly one woman every three days.  Women simply do not know who they can trust.  Even the ones they trust who become partners can use violence against them, rape them or kill them.  Over the last decade 62% of the murdered women were killed by their partner or ex-partner, mostly in their own homes.  In the UK this meant the perpetrators, when convicted, were given lighter sentences because they were known to the victims.  Women simply do not know who they can trust.

I love the saying that if you are not part of the solution, then you are part of the problem.  It may be described as an over-simplistic view.  Well, as an ex-military man and a problem solver, I want to understand it, I want to fix it, I want to make it go away and move on.  Honestly, I want to feel better about being a man in this society.  Well, this is not an issue which can be fixed by doing anything in a physical sense.  We need to raise the level of consciousness on the issue, change the energy and watch the ripple effect it has in the world.

We start by acknowledging that it is ‘All Men’.  This has become an uncomfortable slogan for me to sit with.  It brings up conflicting thoughts and emotions in me.  At the precise moment I feel pulled to defend myself, I consciously know that I am now part of the problem.  Why is that?  Because I have moved from my heart into my head.  I am no longer feeling disgusted by the actions of these men and have moved to thoughts of how I can distance myself from them.  I just want to make out that I had nothing to do with it.  I simply want to save myself and am operating out of ego and in protection.  In doing so, I have lost all concern for the women who are being abused, raped and murdered.

So, I believe that all men are indeed the problem as they are not engaging with men on the solution and too busy defending their own position.  The funny thing is, that this is an indefensible position!

When I mean engaging, I mean united, shoulder-to-shoulder with the same unity as demonstrated in the film Spartacus.  When the slave uprising was eventually put down by the Romans, they were informed that they would all be spared if they gave up their leader Spartacus.  To a man they stood one by one and declared themselves to be Spartacus.  It may not be true representation of history, but it made a great moment in the film.  It did so because it was a movement entirely from the heart, and a demonstration of the depth of love they had for a fellow human being that they were not going to let him suffer alone.  We cannot continue to let the women of the world suffer alone.   As a Father of two sons, I want them to grow up with the deepest respect for women.  As a Father of two daughters, I want them to grow up in a world where they are not afraid of men.

Here are 3 things you can do to be part of the solution:

1 – Listen deeply to how women feel about being in a world where they are in fear of men when they go out.  Stay with the discomfort of it being ‘all men’ and then move it to how ‘all women’ must feel.  The longer you stay with the feeling, the more you allow the energy of it to transform within you.  Recognise that if you follow the process above, you will no longer feel part of the problem and will move to be part of the solution

2 – Stay in your Heart when listening and notice when you move out of feeling to thinking.  Stay in your Soultype posture when feeling your way through it.

3 – Do not stay Silent or hide when men commit these unspeakable acts or when men speak about or talk to women in a derogatory way.  You will have to develop skilful means in the way you deliver these messages.  “The only thing necessary for the triumph of evil is for good men to do nothing.”  —Edmund Burke.

Do not underestimate the change this will have in the world.  I have already felt how the energy in me has changed since we in New Equations have had our openness on this issue and I am vibrating that out to the World.  It feels really different out there now, like a taking down of the barriers around the issue.  It has changed while I have written this short piece and will change for you when you read it. 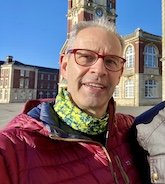 Scott Derben, Soultype 6, is a student in the NEATO Level 1 – New Equations Essence program. You can find him on Hayling Island, UK, working on his house or playing in the sea.