I was first introduced to New Equations in 2000 through a leadership program. The program consisted of four retreats that took place once a quarter over the course of a year. I was together with the same group for the entirety of the program. My group had 23 participants.

During the first retreat of the year-long program, Alan Sheets and Siska Tovey came and introduced New Equations to us and then Soultyped everyone in the group. They came back to each subsequent training and taught us more about our Soultype strengths and their physical expressions as we took part in various leadership training activities.

One of the ways that Alan and Siska supported our learning was through ropes course challenges. For many of the course elements we partnered with one of our fellow group members. The intention was to support our partners by using everything we were learning about our Soultype strengths as we tackled each element.

I want to share with you two of my experiences that took place on the high ropes, meaning the challenges were 35 feet (11 meters) above the ground. There were nets, harnesses, and well-trained guides facilitating the activities, so it was quite safe, but still very challenging.

My first experience involved side-stepping with a partner along two ropes that started off close to each other attached to the same tree, but then widened into a V and attached to different trees at the far end. The challenge was to side-step along the ropes as far as possible before falling (few people were ever able to make it to the other side). 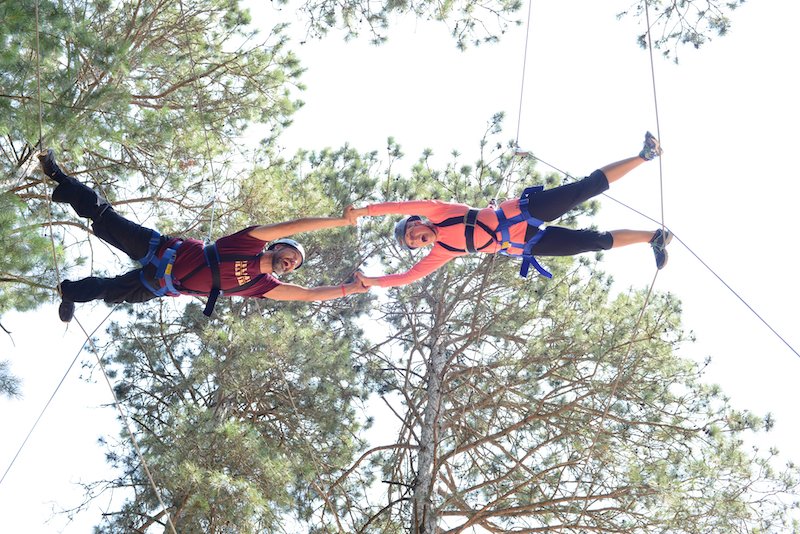 I am a Soultype 7 and I was paired with another Soultype 7. He had already completed the element previously with a different participant, and he told me that what had really worked for them was making sustained and focused eye contact the entire time. He asked me to do the same. My understanding was that I did not need eye contact to be in my Soultype strength, but I wanted to be a supportive partner. So, we both stepped onto the wobbly ropes, let go of the tree we had climbed, took each other’s hands, and looked into each other’s eyes. We had only taken a couple of steps to the side when we both lost our balance and fell into the net below.

After the exercise I realized that my partner had previously been paired with a Soultype 3. Of course! Eye contact had worked well for them since the strength of Soultype 3 includes very focused eye contact. His partner had been able to support him with her eyes using her 3 strength, and he had supported her by receiving it and giving back to her from his 7 strength. Since my partner and I were both Soultype 7s, and eye contact was not one of our strengths, trying to keep eye contact made both of us unfocused and unbalanced. In other words, we were trying to do something we did not innately know how to do.

My second experience came from something I witnessed while watching two other Soultype 7s on the high ropes (we happened to have five Soultype 7s in this training). Their challenge involved moving along two ropes from one high platform to another platform. The ropes were level with each other and separated by about two feet (half a meter). Again, the partners faced each other, each standing on a rope, and met hands. The task was to side-step along the full length of the ropes, keeping their attention on their 7 Spiritual Portals at their lower foreheads.

We all watched from the ground. What we began to see was something that became quite remarkable, astonishing really, and quite unexpected. They slowly made their way, leaning into each other from their foreheads as the ropes they were standing on stretched farther and farther apart. This continued until at one point, about in the middle of their journey, the ropes were so far apart that their bodies were basically parallel to the ground. It was as if the only thing holding them up, that kept them from falling into the net below, was an invisible connection between their Spiritual Portals. They continued moving together, supporting each other in this way, until they reached the platform at the other end.

Those of us on the ground were all speechless for a while, marveling at what we had witnessed, knowing something new had happened: an expansion for each of us personally and for our group.

As I now look back, I’m also aware that these early experiences at the beginning of my journey with New Equations opened the door for me to begin to see the limitless possibilities that are available for humanity through the work of New Equations. I was hooked!! 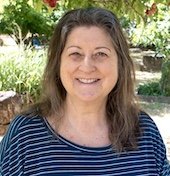 Laurel Avery, Soultype 7, is a student in the NEATO Level 4 – New Equations Spiritual Research program. Laurel is currently exploring planet Earth, being inspired by its spectacular beauty while discovering her next landing place. She creates children’s picture books and 3D animated art to expand the wisdom of the soul in the world.